In order to understand the significance of As-Salt and the status it holds now, we need to understand As-Salt's historical importance. When you look back into history you will find references to various empires that set foot in the Jordanian Land. Some of these prominent empires are the Ummayad Empire, shaped after Prophet Mohammad ﷺ during 661-750 CE. After Ummayad Empire, the Abbasid Empire took control. and their existence in Jordan lasted from 750-1258 CE. Mongols put an end to Abbasid's existence in Jordan. Following the Abbasid Empire's loss, Mongols also did a lot of damage to many Jordanian cities, including As-Salt.

After the Mongols, several other empires also took control of Jordan such as the Crusaders, Mamluks, and Ayyubids. Mamluks started the reconstruction of the destruction caused by Mongols on Jordanian cities such as As-Salt. In 1517, After various empires, Jordan went under the control of the Ottoman Empire, which lasted for about four centuries.

So, throughout history, As-Salt witnessed a lot of changes and, some of these events completely devastated its growth, while some events helped it in becoming the great city it is today. Throughout the years, As-Salt remained a site of utmost importance as the agricultural and religious capital. It also served as a defensive site due to its castle that has massively evolved.

Origin of the name As-Salt:

During the era of Crusaders, Mamluks, and Ayyubids time, As-Salt was named as As-Sult or Szalt. The name As-Salt started in the 14th century. This name As-Salt is said to be derived from Latin origins referring to "Saltus". This word simply means "the forested valley" or "the carved mountains".

As-Salt is a city that slowly evolved from a forested center, so the first meaning makes a lot of sense. The valley mentioned in the meaning refers to the nearby Valley of Shuaib (Valley of Jethro). The 2nd meaning referring to the carved mountains is basically a sign that this city is composed of adjacent mountains adjoining each other as if it has been made by cutting through them or carved through them.

As-Salt A Place of Tolerance and Urban Hospitality: 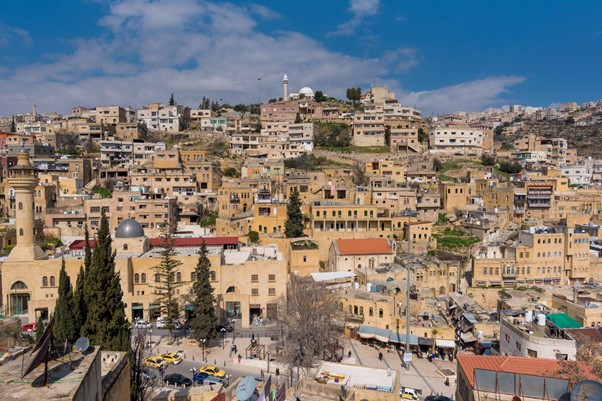 Located in the northwest of Amman, Jordan, As-Salt always has been a site of utmost significance from the Ummayad Empire to the Ottoman Empire. Throughout its history, it remained an agricultural and religious capital. It also served as a defensive site due to its environmental advantages. Due to its position, it also served as a trading link between the eastern desert and the west.

The last 60 years of the Ottoman Empire are considered to be As-Salt's golden period. In this time interval of 1860-1920, this region greatly prospered after the arrival of merchants from Syria, Lebanon, and Nablus. These merchants settled here and started making a fortune through banking, farming, and trading. This period of prosperity attracted various skilled arts man and craftsmen to As-Salt. These skilled craftsmen transformed even the most rural areas into a thriving town with a distinctive layout and unique architecture.

As-Salt is a great example of contrast in different cultures, religions, and communities who live together in a peaceful co-existence to maintain the distinct cultural position of As-Salt.

As-Salt has the significant value of being an important landmark in Jordan. As-Salt is a beautiful example of social solidarity and how humans can co-exist with different religions and cultures. It goes out to show us all how these unique mixtures of cultures blend to form a majestic town.

In Today's article, I discussed the historical importance of As-Salt. I also gave a brief on how it came to be known as As-Salt. In the end, I explained its regional importance and why it deserves to be preserved as a World Heritage Site.

That's all from my side for today. If you have any questions or want to give your feedback, we would love to hear it. You can also follow us on Instagram, Facebook, and Linkedin. Stay tuned as we post more informative blogs and fascinating experiences.

Travelling Jordan Adventure Experiences
There are no comments yet.