Explore Pompeii with an Archaeologist 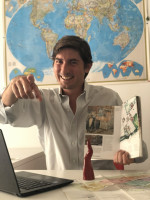 Explore Pompeii with an Archaeologist

People viewed this experience
Join us in our small group of MAX 10 PAX for a special and intimate tour of Pompeii with TRUE archaeologists!

With the help of my university colleagues and students I created this walking tour for those who wants to understand the Roman times through the eyes of an archaeologist who can explain to you the different aspects of the daily life 2000 years ago.

Working as an archaeologist and tour guide in different places of the Mediterranean sea, I’m honored to have hosted more than 5000+ guests and companies (as Apple, Google, Facebook, Airbnb, Cisco, Alibaba) from all over the world to Pompeii with my online and in person experiences that obtained 1000+ 5 star reviews.

In this experience we'll show you in a very relaxed way some of the most important buildings but also hidden details.

The morning time is the best for who wants to spend the entire day into the site. After 2 hours walking tour you will have a great introduction and a good orientation about the ruins.

The afternoon time during the summer is the version called: UNCROWDED, the best way to appreciate the ancient city without being suffocated by the crowd and the hot temperature!

With this tour you have the possibility to see and understand very clearly the public areas: Theatres, Thermal Baths, Forum (Main Square), Sacred Area (temple of Apollo, Temple of Jupiter).

We will investigate also the private building: Thermopolium (a roman "fast food"), Bakery, the Fabric Market.

I'll show and explain to you one of the most well preserved Roman houses and the famous plaster casts of the victims of the eruption of 79 A. D.

full refund up to 7 days the start of the event