Today we will explore some of the 5 best places that you must visit whenever you decide to go to Saudi Arabia. Our top picks for 5 best places to visit in Saudi Arabia are Riyadh, Jabal Alfil, Kingdom Center Tower, Al Wabah Crater, Jeddah. So, here is a small reveal of what to expect before you book an experience from Viavii to go exploring in Saudi Arabia.

Saudi Arabia lies in the southwestern part of Asia. It shares borders with the UAE (United Arab Emirates), the Arabian Gulf, Qatar, the Red Sea, Jordan, Kuwait, Iraq, Yemen, and Oman. Saudi Arabia has a lot of qualities that make it a unique country. The most interesting one is its cultural diversity and geographical area. Its geography is distributed into forests, deserts, mountains, and grasslands.

The information above is just the tip of the iceberg, so here are 5 of the best places in Saudi Arabia to pique your interest in 2021. 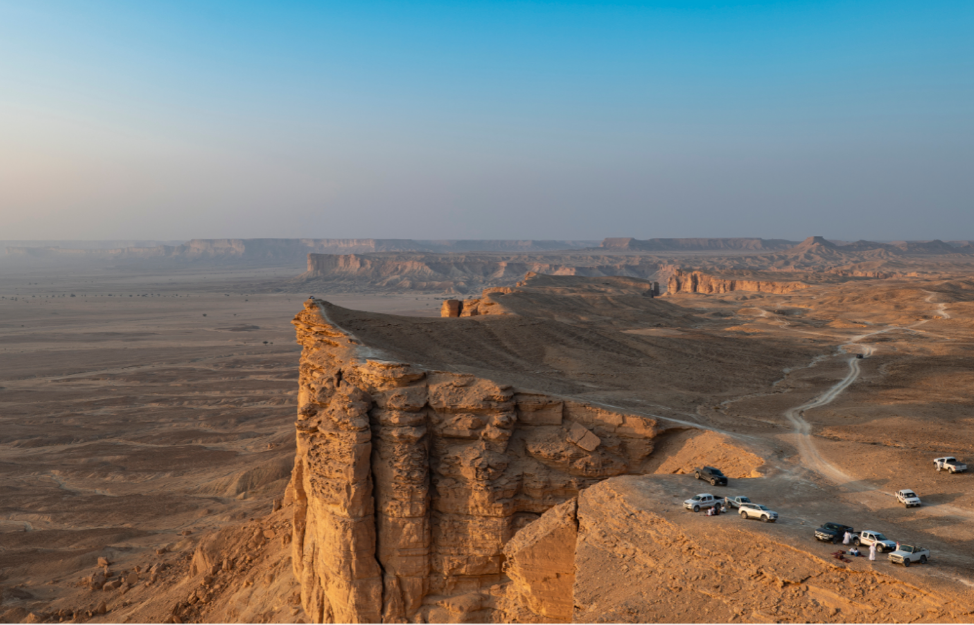 How do you get there? It may take approximately one hour and 30 minutes by car to get to Jebel Fihrayn from Riyadh. Because of how famous the place is, the authorities paved a road that takes you to the site’s gates. When you get into the gates, you will find Sha’ib Khaimah, a large valley. The valley becomes greener and more beautiful when the rainfall begins, from November to April. The Sha’ib Kharmah at this time of the year is a great place for a picnic.

The Jebel Fihrayn is every visitor’s favorite spot because of the cliffs that rise from the desert and stretch toward the sky. As you reach the top of the cliffs, you have a beautiful view of the sky as it looks like it is merging with the earth below. Another astonishing thing about the tours of Jebel Fihrayn is that these tours mostly end with stargazing and dining in the middle of the desert.

Advice from those who traveled there recently is that the best times of the day to go touring in Jebel Fihrayn is either at 6 am or 2 pm. Also, you can wear anything you want to, but for men, traditional Saudi Arabian clothing will do you more harm than good throughout the journey. For the ladies, shorts will give you a hard time. 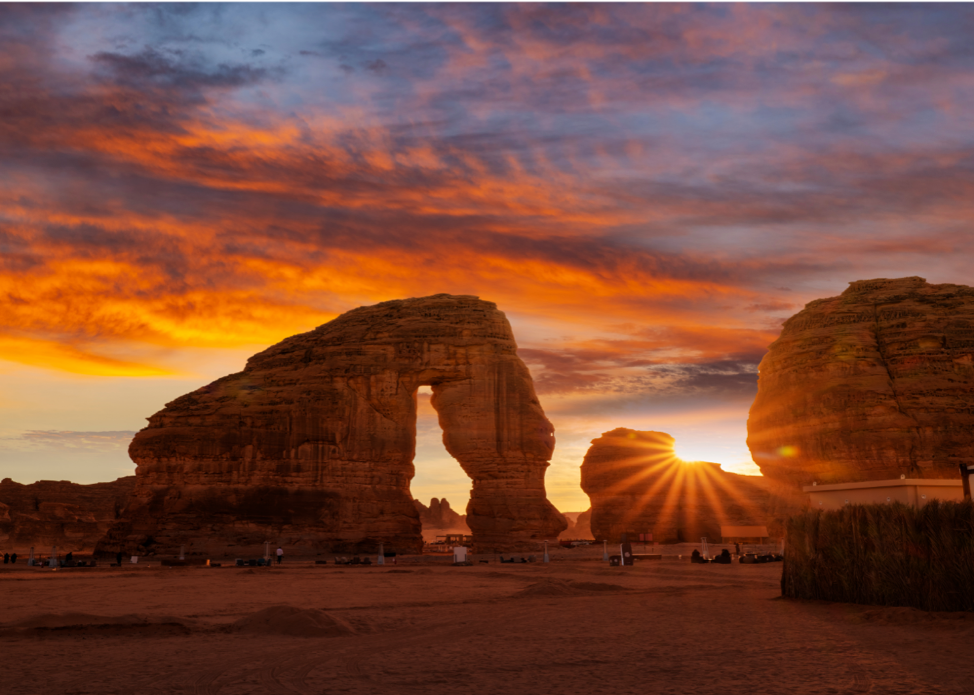 The kinds of shapes and forms nature can create with years of water erosion and wind are mind-blowing. Every inch of this natural wonder was crafted entirely by nature itself. The Elephant Rock (Jabal Alfil) is one of Saudi’s many natural wonders, which dwells in the middle of the Al Ula desert. Jabal Alfil is a structure comprising of golden desert sands, ascending approximately three stories into the beautiful Saudi Arabian sky, taking the form of an elephant, with its trunk in the ground. Jabal Alfil is one of the popular attractions people go to, especially to take pictures of themselves present at the site.

The beauty of this natural wonder becomes more beautiful if you view the whole scenery of golden sands with rocky outcrops that surround the Elephant Rock. These other formations are equally impressive in terms of their sizes, shapes, and figures. You should visit Jabal Alfil when the sun goes down, you will be able to enjoy the breeze and the magnificent views. Jabal Alfil is one of the best places to visit in Saudi Arabia. So, you should visit this place, take pictures, and share the moment with your friends and family. 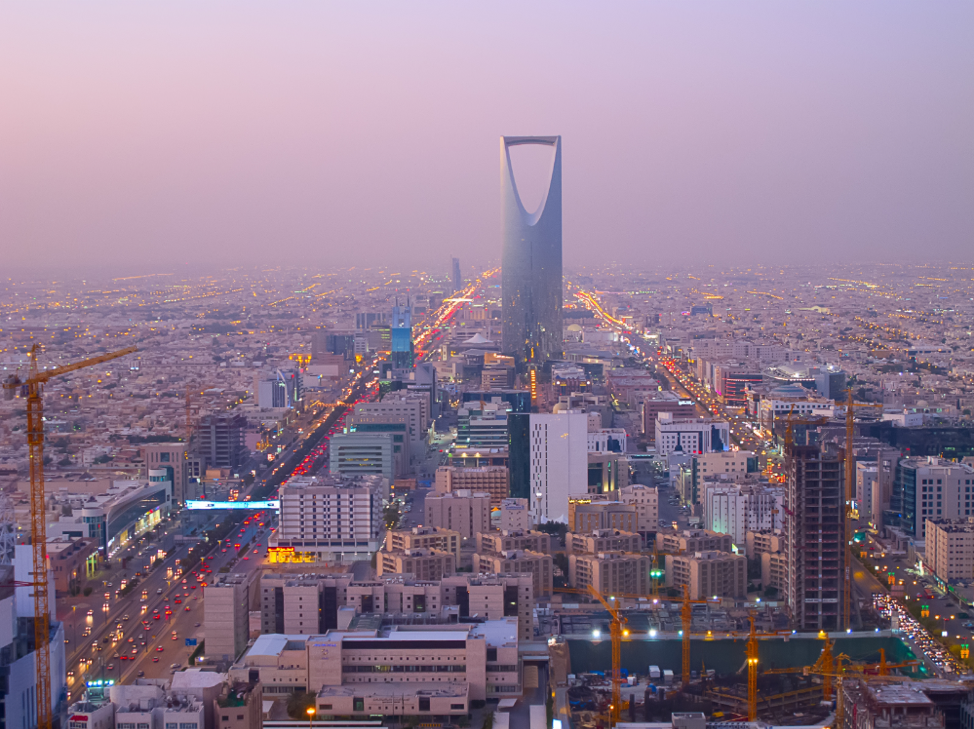 After its construction, the building won various awards. In 2002, it won the skyscraper of the year award for design and functionality. In 2003, it won the world’s best new skyscraper of the year, and in that same year, it got an honor award. It was a finalist in the professionals’ choice awards in 2004, and in 2005, it got an honor award for architecture.

Kingdom Center is a mixed-use structure that includes the Four Seasons Hotel, offices, Conference and Wedding Hall, Business Center, and Luxury Residential Apartments. The top of the tower is an inverted parabola with a public sky bridge on top of it. The sky bridge is a steel structure with windows on both ends. After the payment of a fee, all visitors must take two elevators to reach there. 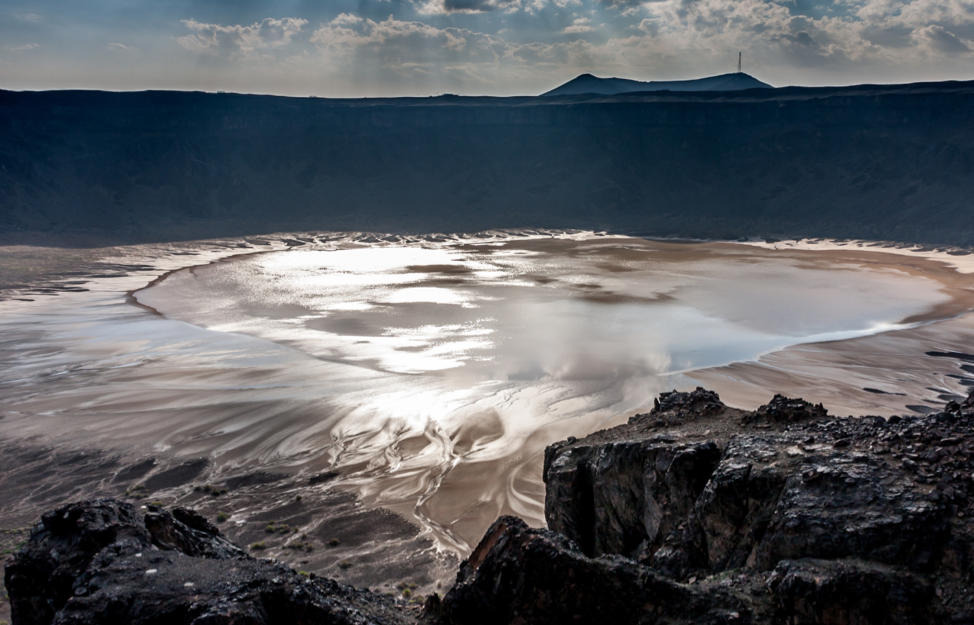 Al Wabah Crater, found in the Hejazi region in Saudi Arabia, is a crater formed by a volcano, and is situated at the western edge of the Harrat Kishb basalt plateau. This crater is a 2 hours’ drive from the north of Ta’if and about 4 hours’ drive from Jeddah. As Saudi Arabia has many natural wonders, Al Wabah Crater joins the list of the most popular and visited ones. The beautiful lunar-like landmark has an alien-like remarkable sight. Though there are many natural wonders, this one is far away from the ordinary.

People assumed the crater formed from a collision between a meteorite and the earth, but further research told us otherwise. Geologists later revealed that Al Wabah was a maar crater (one filled with water and has a shallow crater). These shallow craters are results of volcanic action that occur when hot lava joins groundwater.

There is a local romantic, yet tragically-ending legend of how the Al Wabah Crater came to be. They say there once were two mountains named Tamia and Cotton in that area. One night, the action of lightning enhanced Cotton’s beauty, Tamia fell in love with Cotton immediately after the incident. Tamia then wanted to draw closer to Cotton because the space between them was vast. Tamia’s cousin, Shelman, knowing of Tamia’s intent, got envious and shot Tamia with an arrow that sent Tamia crushing and tumbling down. Tamia’s fall turned her into a crater. That crater is what people now call the Al Wabah Crater. 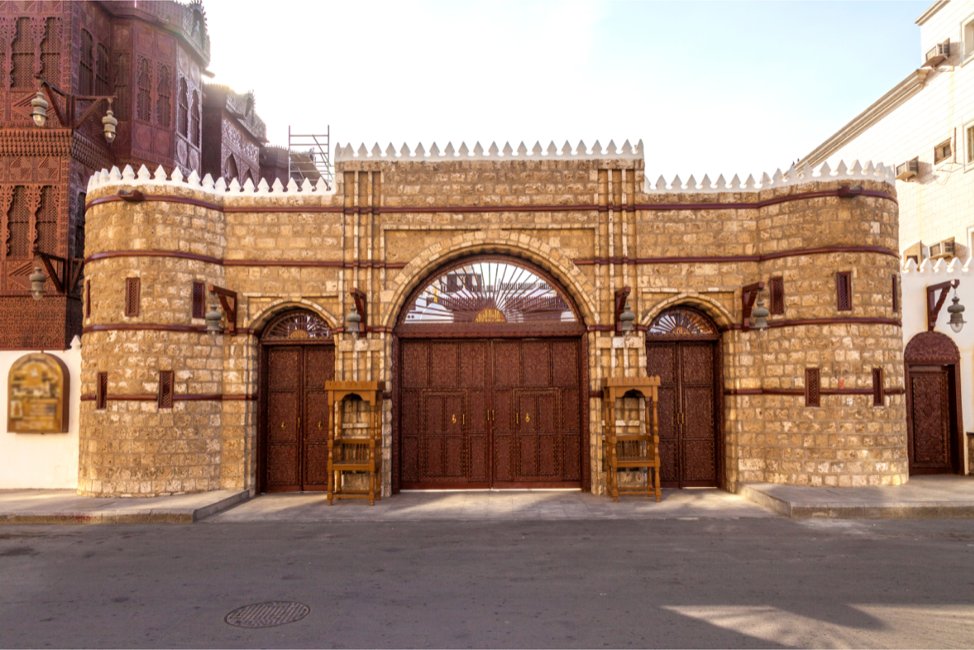 Jeddah is one of the places you think of when someone mentions places that merge ancient life with modernization. Jeddah lies along the Red Sea, close to Mecca. History informs us that Jeddah was the port where Islamic pilgrims arrived on their way to the two holy cities of Mecca and Medina. Jeddah is the second-largest city in Saudi Arabia, next to Riyadh.

It has one of UNESCO’s historical centers. Al Balad is a UNESCO World Heritage Site with alleys between old houses made of coral stones. Most of the buildings have been restored in recent years, including the 106-room Naseef House, where Abdulaziz Ibn Saud, the former king of the Kingdom of Saudi Arabia, stayed in 1925 before he gained the title of king of unified Saudi Arabia.

Present in Jeddah is Jeddah’s Corniche. It has been changed into an area of restaurants, swimming bays, and cycle paths. People come here in anticipation to see the sunset over the Red Sea and to see the 300m King Fahad’s Fountain with its beautiful waters lit up till midnight.

Conclusion:
Saudi Arabia is a diverse country with many beautiful, adventurous sites. So for today, we tried to cover some of the most well-known places to visit in Saudi Arabia. In today's article, you will find some really interesting details and information regarding Jebel Fihrayn, Jabal Alfil, Kingdom Center Tower, Al Wabah Crater, and Jeddah. Give Viavii the chance to help you figure it out by booking a flight from us to go exploring the vast and majestic kingdom of Saudi Arabia.

That's all from my side for today. If you enjoy reading travel blogs and want to read more then check out Jordan's 5 recommended travel places blog. Plus, if you have any questions or want to give your feedback, we would love to hear it. You can also follow us on Instagram, Facebook, and Linkedin. Stay tuned as we post more informative blogs and fascinating experiences.