An Experience in Winneba, Ghana you Need to Feel in 2021

Winneba was not as I anticipated. I first imagined it as some kind of a large city with so much noise and the classic city-looking feel but it turned out differently. On my first visit to Winneba, Ghana, I noticed a couple of things as a first-timer. 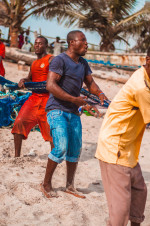 It went as I anticipated. There was a beach, and I waited throughout the week till Friday night, around 7 pm. There were loud sounds of music emanating from the beach. I went to see what the fuss was all about, and when I got there, there was a party.

As a newbie around, I asked two people who turned out to be boyfriend and girlfriend if they had parties like this there every Friday night, and they laughed and said yes and on Saturdays too.

I continued to ask them what other fun things happen on the beach during weekends or even on weekdays. Their answer got me feeling uneasy for Monday to come soon. Do you know what they do on weekdays? You may have guessed right, they go fishing. For someone who had not been on the sea before, I couldn't wait to join them on Monday.

Monday was generous enough to come early, at least for me. I woke up very early at 6:20 am to see how fishing in Winneba went. Unfortunately, they had already gone to sea. It turned out they go earlier than I anticipated.

I waited around for a while. A while felt like forever as the fishermen came back around noon, almost to 1 pm. What I saw then, I had never seen before. As their canoes landed on the shore, they all got off and called for other men around to help them pull the canoe to the beach.

All hands on deck!

They tied ropes that look bigger than any ropes I have ever seen to the canoe. There were two ropes parallel to each other, some men grabbing onto one and the others holding onto the other.

What I saw next was that one man started singing a song I have never heard before. Immediately he started singing all the others joined him. It sounded like an awful choir at first. But, as I listened on, I began to hear them harmoniously singing this song as they pulled on the ropes.

This scene was like what we see in the game, Tug of war. They paused for approximately 5 seconds in-between pulls. They all did this at the same time. It was so beautiful to watch. I joined in to pull too. Though I was not the only one pulling, it still felt like I was pulling a mountain. And even if I didn’t get to go to sea with them, this was something that made me happier.

Winneba also houses one of the best universities in Ghana, the University of Education Winneba. I decided to check their campus out. It was a Friday, and as I toured the school, I was impressed. There are beautiful green sceneries everywhere. Each faculty has its department, and the town's people can also move freely within the university.

I found myself a new friend, and we spoke for a while. As I was about to leave, he told me to stay till 5 pm. I asked why and he said I had to wait to find out. My new friend and I hang out a bit till 5 pm. There are two halls in this university named after some great people in Winneba. The first is Ghartey hall which contains both females and males, and Aggrey hall, for females only.

The guy took me to Ghartey hall. I saw they were arranging some locally made drums in front of a statue of a man blowing on a horn. He said the boys named that statue Father Thompson, and he had no idea why. Some of the boys came with clothes tied around their waists and red bands on their heads to dance.

I noticed what was about to go on and asked if they were about to have "Gyama"? He said yes. Almost all schools in this country do this, especially in high schools. "Gyama" is a special kind of singing and dancing where the boys create their songs with just anything. There are no electrical instruments used here.

Just some locally made drums and specially made metallic objects they strike together in sync with the song. It started with only a few people, then as time went on, others came to join, as it always happens. This activity is engaging; everyone sings, dances, and anyone can bring up a song. I began to love Winneba for this.

What to eat in Winneba

As stated above, there are so many foods you can eat in Winneba. One they are most known for is their deliciously made Kenkey. Kenkey is made with corn dough most of the time. The locals eat it with hot pepper and some fish. Some of them eat the Kenkey with pepper, fish and they cut and boil some okra and add to it.

Places to buy this food are abundant here. Everywhere you go, you will see a woman or a girl selling some.

Conclusion
To end it all, Winneba has so many amazing things you should experience for yourself. From visiting the beach to seeing students have “Gyama” and joining in. There is no other travel website you will find this kind of information besides Viavii. Stay in touch for many more stories about countries you won’t see anywhere else.

Travel Cool Ghana Beach
There are no comments yet.